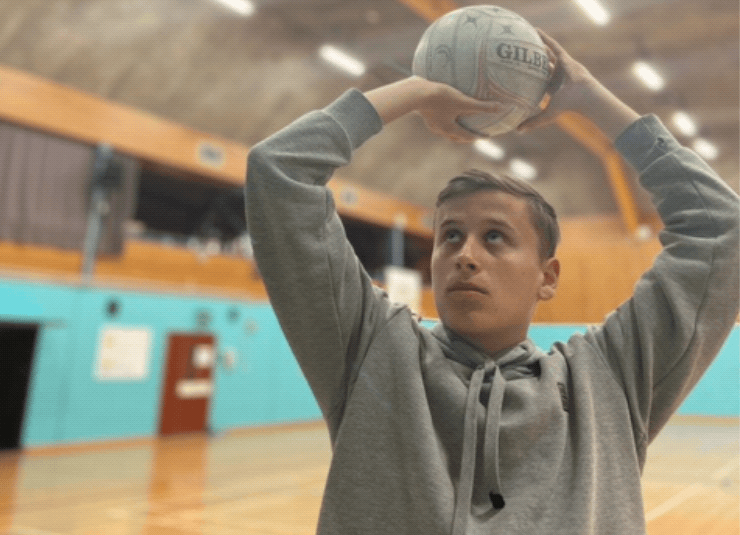 Dylan Dodd is a young netballer with a bright future. He was also announced earlier this week as a new member of the Netball New Zealand Youth Board.

We find out a little bit more about Dylan’s netball career so far, his ambitions and find out more about being selected for the Youth Board.

CNC: When did you first start playing netball?

DD: I played my first ever game of netball (indoor) in September of last year and developed a passion for the game almost instantly.

CNC: Did someone recommend it to you or what sparked your interest in playing?

DD: From about the age of 12 I loved to watch netball on tv (especially Maria Folau highlights) and go down to the local courts to practice shooting. I didn't even know being male and playing competitive netball was possible until the first ever Cadbury Series last year when I watched the NZ Men’s Netball team in action. I clearly remember the day I was playing indoor netball and got asked to trial for Hornby Netball Club. I happily accepted and everything sky-rocketed from there.

CNC: Are you playing any other sports at the moment?

DD: At the beginning of my netball journey I was super into basketball. You will definitely catch me using my basketball skills such as an occasional layup in my games. I am not currently playing any other sports apart from Netball and Netball alternatives such as Indoor 7s and 6s.

CNC: What other sports have you found useful for netball?

DD: Basketball has contributed heaps towards my netball game. Basketball has helped me with my shooting accuracy, passing, team work skills and so much more. I definitely prefer netball because I enjoy having a set playing role.

CNC: What positions do you play?

DD: My all-time favourite position to play is GA. It has been my main position ever since the start of my netball journey. I enjoy being able to help the ball through the court whilst also playing a vital playmaking and shooting role. Playing GA in men’s netball has resulted in a fair share of new challenges. I have to play super tactical and find new ways to combat the height difference in the circle. I’m also learning how to play WA and C. I practice these positions alot in social indoor netball.

CNC: Men's netball is growing in leaps and bounds, do you have any ambitions yet for playing at the top level?

DD: A huge goal and ambition I have is to eventually play for the NZ Mens Netball Team. Ever since the first Cadbury series I have idolised the current NZ Men’s captain Kruze Tangira. I admire his leadership and drive to grow men’s netball. His speed, versatility and precision on court captivates me and I hope to achieve his level of skill in the future. Having the opportunity to play against him and learn from him at the South Island Men’s Tournament was such an incredible opportunity. Kruze was so supportive and encouraging and has really motivated me to aim high. I am also very passionate about growing the men’s netball game. I believe netball should be a sport for everyone regardless of Gender, Race, Sexuality or anything that makes us unique. That is the message I stand by and will make an effort to spread.

CNC: Any advice for young players looking to get into netball?

DD: Be unique and be yourself. Don't let stereotypes define you or tell you what you can and can’t do or achieve. Try a variety of positions to find out what you enjoy playing the most. Take every opportunity and make sure you are happy and enjoying playing netball.

CNC: Congratulations on your position on the Youth Board! What made you apply, what was the process and where to from here?

DD: I first saw a post on Facebook and without even thinking about it I put forward an application for the role. In the application I had to mention all of my netball ambitions and what I could bring to the youth board. I mentioned my passion for developing men’s and boy’s netball starting from a young age and also my goals for developing netball alternatives such as Fast5. A few weeks later I received a phone call informing me that my application had been successful, I was absolutely stoked. We recently had our first zoom call and got to know each other a bit better. The group was full of diversity and uniqueness and it was so interesting to hear about everyone’s netball goals and ambitions. We all had our similarities and differences but everyone had one thing in common - an appreciation and passion for the game of netball! There are so many awesome opportunities to come being a part of the youth board and I’m just so excited for what comes next on my netball journey.

We are excited for you too Dylan and are thrilled that Christchurch has two representatives on the board – both yourself and Isabella Galvan. Good luck for next year and thank you for what we are sure will be inspiring for others.